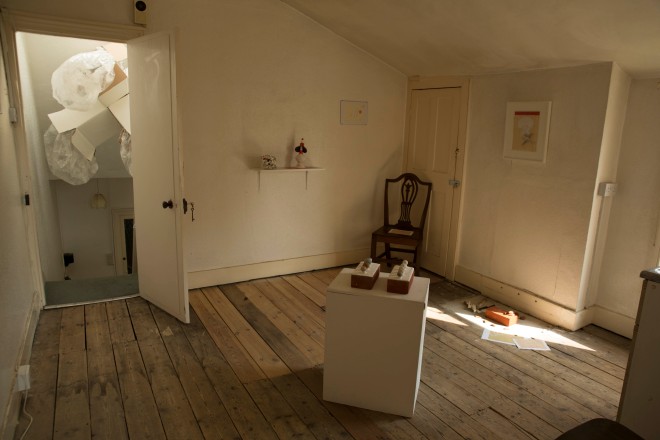 For Bread and Jam II, Nicola Durvasula presents a new body of work of fine line drawings inspired in part by the graphic notations of experimental composer Cornelius Cardew as well as recent dialogues with pianist John Tilbury, her musical mentor.

These works will be accompanied by a performance at the private view. Entitled Brockley – Variation 9, this piece has been especially composed for the evening. Nicola (keyboard) will be joined by Nicola Vella (flute/vocals), Natasha Greenham (musical saw) and Stewart Hughes (percussion).

Also on display is an example of Durvasula’s watercolour . Her figures, almost human yet clearly not of this world, stare out fiercely with pinched red features. Durvasula spent many years living in Hyderabad, India and the influence of Indian miniature is clear. Her fluid lines are also inspired by Japanese calligraphy, (in particular the work of Otagaki Rengetsu). A selection of her found objects/sculpture will also be displayed including ‘homage to John Cage’ with his passion for mushrooms.