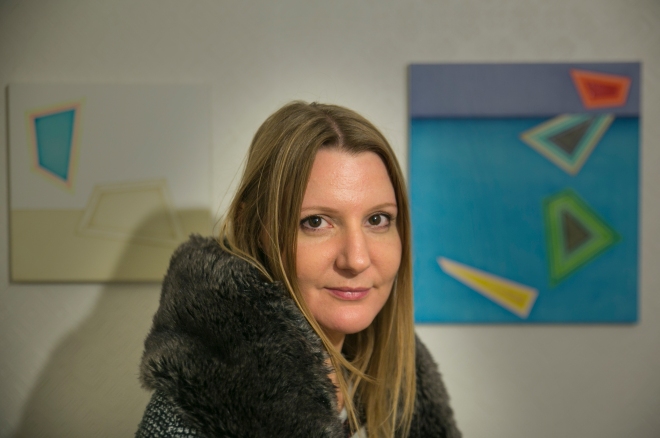 For The Shapes We’re In at Bread and Jam, Selma Parlour celebrates the shape-shifting properties of the trapezium, which can be seen as a flat shape or as a rectangle canting into illusionistic depth.

Parlour’s paintings are meticulously rendered through soft films of transparent oil so that imagery looks drawn or printed. In her interrogations of the technical problems of the medium, Parlour frequently conceives of painting as a two-dimensional stage space that curtails fictive distance as it represents it, and as an abstract diagram for the re-presentation of photography’s installation shot of abstract painting.

Selma Parlour (b. 1976, Johannesburg) completed her PhD in Art at Goldsmiths College, London in 2014.

Recent projects include an artist residency and solo exhibition, entitled Paradoxes of the Flattened-out Cavity, at Dio Horia in Mykonos (2015).

In 2014, Parlour received a Runner-up Award in Painting from the Arts Foundation, London. Her work also features in 100 Painters of Tomorrow, a Thames and Hudson publication (2014).

Collections include the Saatchi Gallery, London.