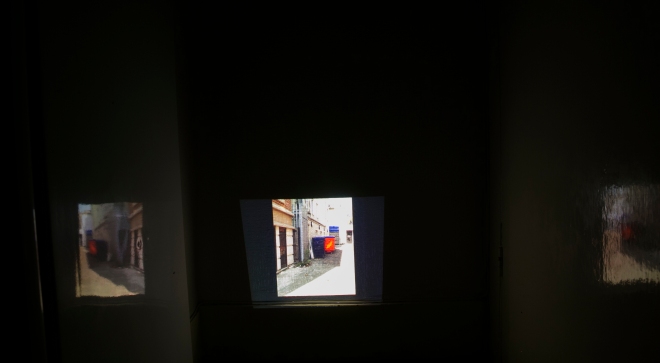 “Tape has been a constant in my work for some time. In earlier paintings on canvas, I used it to mask out areas and hem in flat planes of colour. In later work I left it on, using paint-stained bits of masking tape to convey line and structure.

I began using more relevant industrial materials to reflect the architectural subject matter–perspex, laminate, gaffer tape, wood and metal. However, soon the unconscious arrangements of tape that I’d placed randomly by the side during the making process became more interesting than the work itself. These accidental compositions were striking yet ephemeral. I liked that they were directly on the wall and that, although random, were strangely organised. A measured disorder.

The recent gaffer-tape drawings made me think of entropy, and the tendency for all matter to evolve towards a state of uniformity. Tape curls up at the edges, straining against the material it supports. It’s as if the work is relaxing into itself, slowly yielding to a point of perfect equilibrium, before falling off. And it will, in time.

The work sustains itself – the re-used tape becomes recycled in its new form; the transient, concrete installations are short-lived, assembled and re-assembled. The works morph into others through a process of recycling and remaking. Each piece spawns countless others, negating the art object as a whole. Knowing this is a challenge. One that calls on me to eschew all previous schools of thought. Unlearn the past. It is a complete emptying out of the old paintings.”